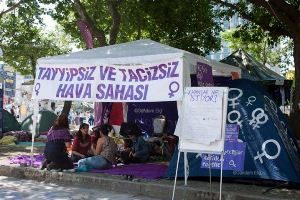 The protests, which began against the pillaging of Gezi Park in Istanbul, are continuing with the anger of the people in 76 cities against the JDP government and its representative Tayyip Erdoğan turning into a resistance. This big resistance has echoed with the rebellion of women since the beginning.

We took to the streets against the patriarchal system trying to confine women to families, to houses and leave public space to men. We struggle to be present freely and equally in city centers, avenues, streets and parks…. We struggled against the armored crowd control vehicles and the tear gas of the police, fought in the barricades, organized the resistance in neighborhoods and city squares; we have been on the streets. Now we declare that we won’t leave these spaces we won through resistance.

When we learned that our right to abortion was going to be taken away, we, thousands of women stood together. We rebelled when the JDP intervened with how we live, how many children we have, and what we wear. Against the impositions on our bodies and identities, we cried together “it is our life, our decision.”

We took to the streets against the patriarchal system and conservatism reinforced by misogynist Tayyip Erdoğan and his government, against women murders and violence against women increasing during JDP’s reign.

We uncovered heterosexist JDP policies imprisoning women inside houses, imposing on them the burden of child care and all other care work, equating woman with the family and controlling women bodies and sexuality.

We disclosed how the government boasting about increasing women employment exploits women labor by condemning women to flexible and precarious work. In worker’s resistances and strikes we resisted for our labor rights and security.

We said again and again that wars hit women twice. We, Turkish, Kurdish, Circassian and Laz women stood for people’s solidarity, for peace against war. We emphasized that the socialization of peace requires the participation of women and we said peace is not possible without women.

Women high school and university students struggling at the very front in this big resistance have turned the rebellion into hope.

We, as women who claim our nature, water, streams and neighborhoods, will construct together a city where we can live equally and freely.

Today we will continue to rebel on the street. And we are more powerful because thousands of women who resist for their futures walk much more courageously on the streets that used to make them uneasy. Against the desire to imprison them in their houses, pots and pans are now tools for protest that irritate their enemies.

In the protests that began for Gezi Park, we stood against swearwords that were misogynist, sexist or homophobic. In the barricades we resisted together with LGBT individuals and women sex workers.

It is obvious that the misogynist JDP government is frightened. Women who will not leave the streets and squares in Istanbul, Ankara, Eskişehir, İzmir, Hatay, Dersim and Antalya will not go back to their houses. Because the resistance will go on until we gain all our rights and all the streets are ours.

We are concerned about the future of all women as long as this mentality that instigate hostility towards women prevails and Tayyip Erdoğan continues to rule. As we repeatedly cried out in our protests, we will continue to resist for our right to live and for our freedom.

We will continue our struggle and stay on the streets until we achieve a “life without Tayyip and a life without assault.” We won’t leave the barricades, the parks, the squares or the nights. 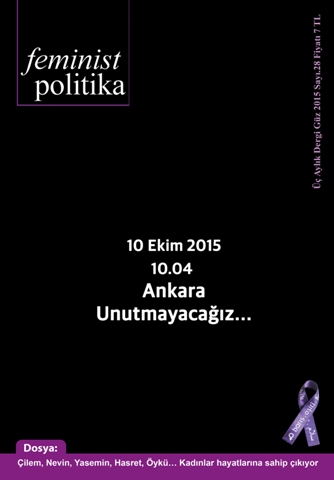